Military haircuts look great on men of all ages and are often seen on little boys to professional businessmen. The military cut is called such because it mimics the standards that are required for men who are enlisted in the armed forces in America.

Of course, you do not need to be in the military to wear one of these hairstyles and some of these military haircut styles are quite popular. 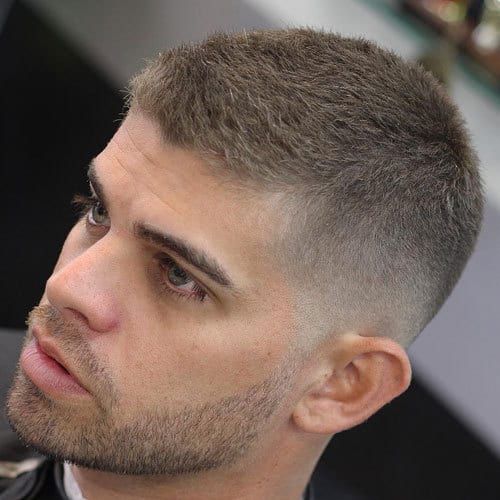 First off, there is the high and tight cut, which is a variation of the buzz cut. The usual length for this haircut is one-sixteenth of an inch. This is a length that is very nearly shaven.

The reason that many men in the military and out of the military get this type of military haircut style because it’s known to make the face more attractive looking.

With this haircut, there is more emphasis put on the cheekbones and the eyes. Therefore, if you are interested in putting more emphasis on the regions of your eyes and cheekbones, the high and tight is the hairstyle to go with.

The men that choose this style in the military are the ones who would like to keep their hair just a little longer than the rest. For those men outside of the military who would like a military style haircut without having to nearly shave their head, the flat-top is the way to go.

How to Cut A Military Haircut

The edges of the military haircut define the cut. They are cut in what is commonly referred to as a high and dry cut. This means that the hairs on the back of the neck and the hairs around and above the ears are cut tightly along the growth of the natural hairline. There are no hairs left looking jagged or out of line, this cut is precise.

How to Maintain the Military Haircut

Military cuts for men are one of the easiest cuts to maintain and keep looking great day after day. They are a wash and go look that consistently looks great with very little hands on or styling efforts.

Maintaining a military haircut is fairly easy to do. Simply have the cut shaped up and the edges trimmed with an electric razor every few weeks.

If the haircut is not consistently reshaped every four to six weeks (or sometimes even sooner) it will lose the sharpness of the cut and the style will begin to look sloppy and unkempt. There is nothing less professional looking than a man with a haircut that looks totally great for several weeks and then awful before it looks great again.

A true military cut is reshaped consistently and always looks sharp and cared for. The hair around the ears can also be shaped at home with an electric razor once or twice a week to keep it looking great each day. 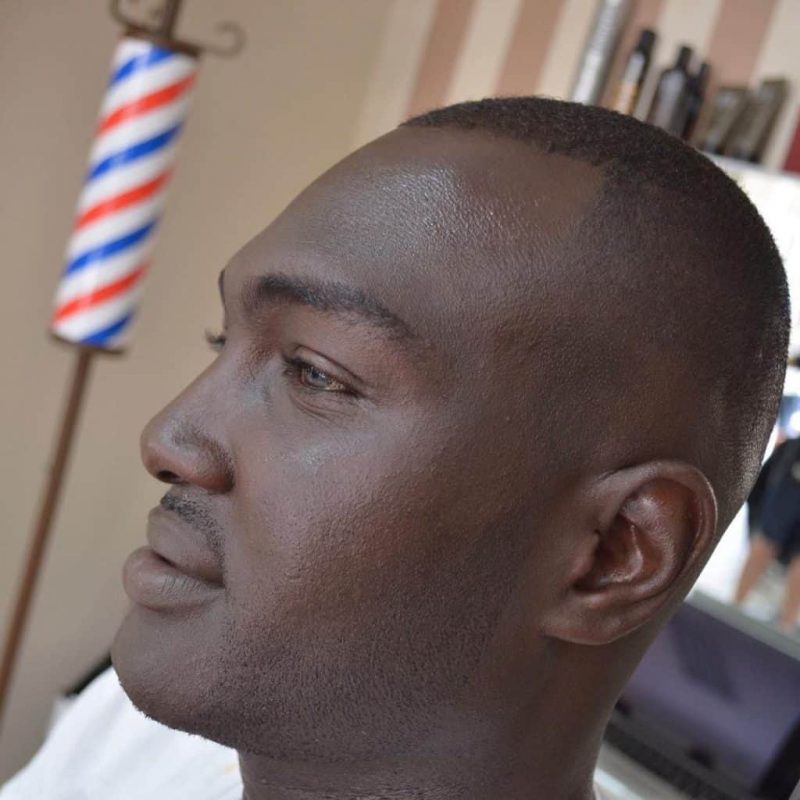 The day you’re inducted, you get yourself a free haircut—one of the most easily recognized military haircuts for men in the world, in fact. There’s a generic version, but different branches and military barbers may have their own twists. 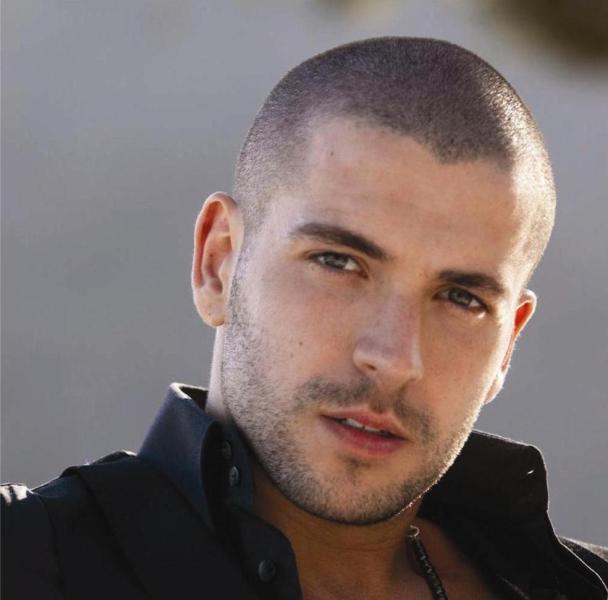 If anything, the burr cut is even shorter than the scalping you get with an induction buzz. It’s an all-over job, however. You’re not quite bald, and it’s not as short as you can go, but there’s not a lot of hair there, you know what I’m saying? 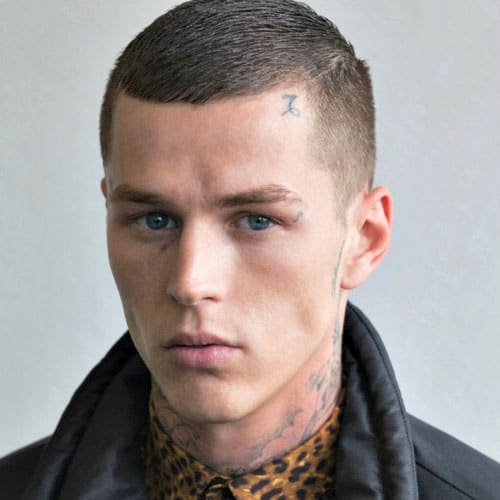 The butch cut as the ’50s and early ’60s favorite—just read a few Stephen King books set in those time periods. The name might just be because you need a bit of butch wax to make your hair lie down properly after you get this crop. 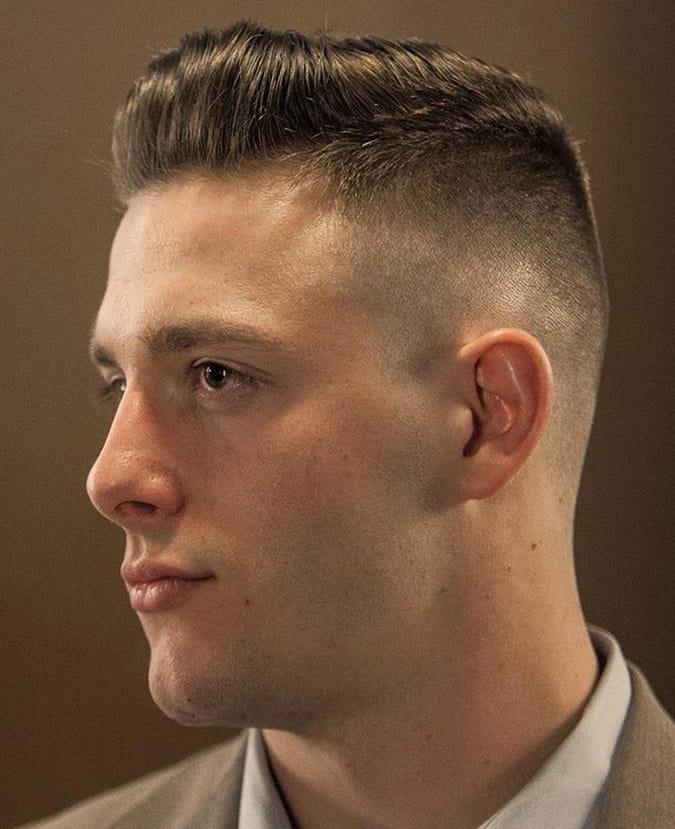 The regulation is more than just a handsome military haircut for men. It’s a current trend. It’s the next best thing to an undercut—it just tends to be a bit neater. The small pompadour at the front is vital, by the way. 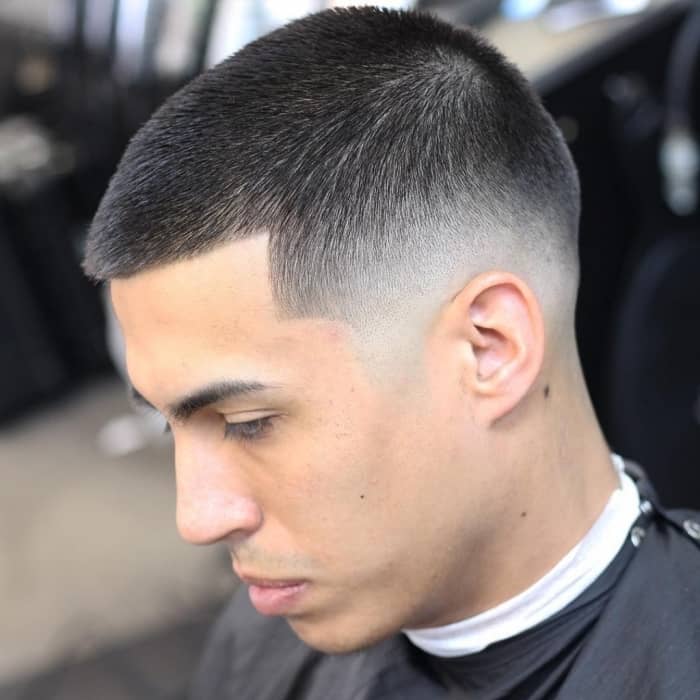 Like many other military haircuts, the crew cut is popular among civilians, too. It’s a spring and summer favorite for men with thick hair, and for boys of all ages. The odds are good you sported this ‘do at several points in your life. 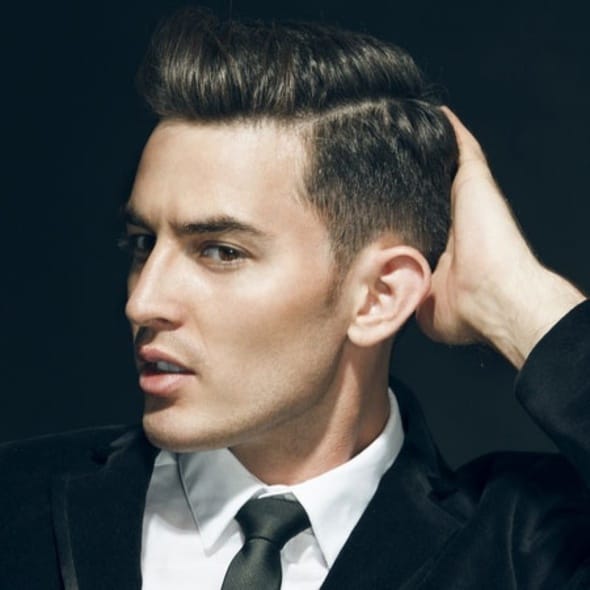 The Ivy League resembles an undercut, as well. It differs from the regulation cut because it’s slightly longer at the sides, and often at the top, too. It’s also very delicious, gents. Go forth and Ivy League in peace. 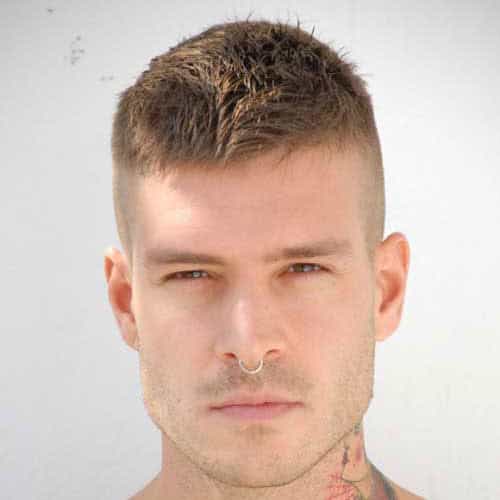 The brush cut is another retro favorite. It’s a cool coif for hot weather, plus it’s altogether neat and tidy. In addition to being an attractive military haircut for men, it’s also ideal for a more formal professional environment.