Black man tends to have curly hair and all hairstyle doesn’t suit their type of natural hair. That’s why a few styles are frequently donned by them and man bun is one of them. Black man bun is becoming popular than ever in recent days. Black men are embracing this style wholeheartedly. If you’re wondering what a man bun is, read on to know the answer. 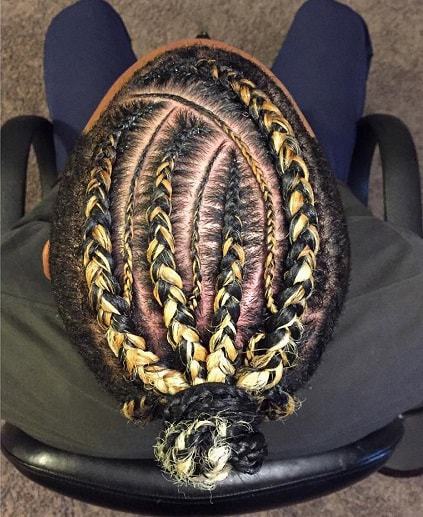 Man bun itself is a significant style. No matter how you wear a bun it will add a new dimension to your style and personality. So, one just needs to know how to do a bun perfectly to get the enchanting beauty of a man bun. We have gathered the best ideas here to inspire the bun enthusiasts. Check the list below. 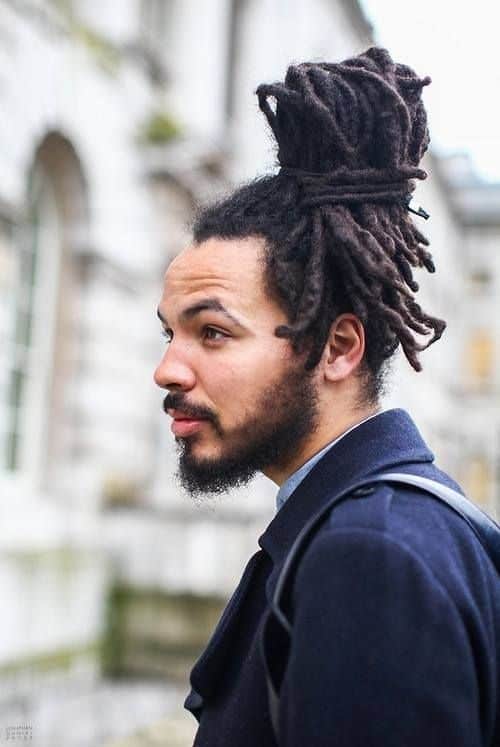 If one has an abundance of hair, he can try this sort of styles. Heavy voluminous dreadlocks have been tied up to make a man bun. 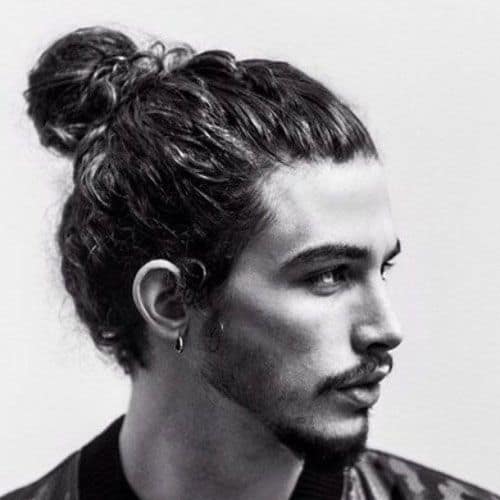 Not all man bun looks aesthetic. A less curly medium bun will bring out the artist entity in you. 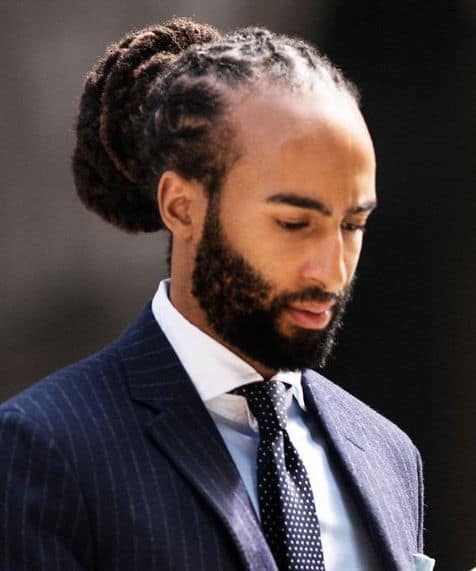 Don’t get tensed about the workplaces. This picture depicts the way how one can don a black man bun while going to professional and formal places. 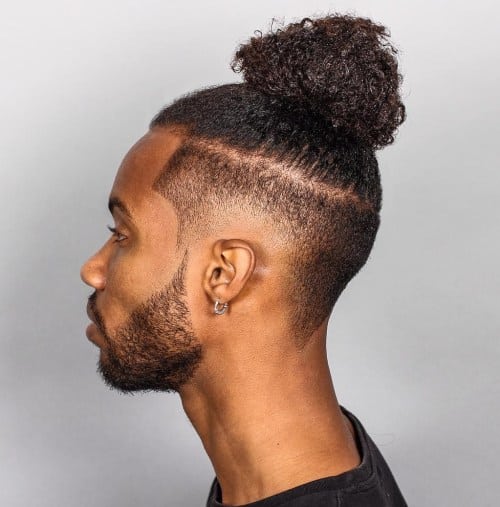 A fade is an easiest way to make the look very well planned and well organized. Black man bun looks good with the association of a fade haircut. 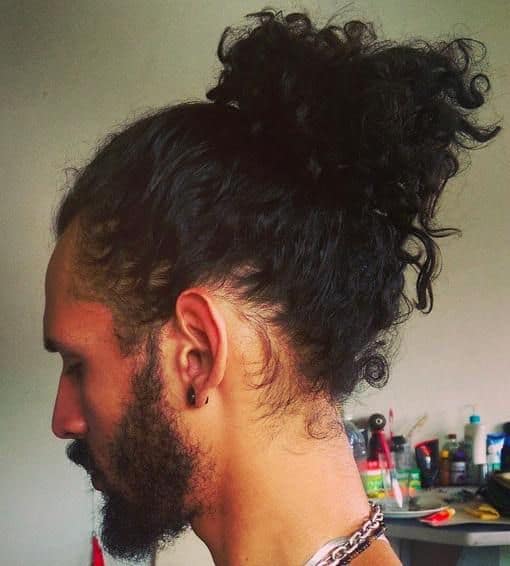 Some people love to be cool and casual. Over styling is not their cup of tea. If you’re one of them, try this messy style. 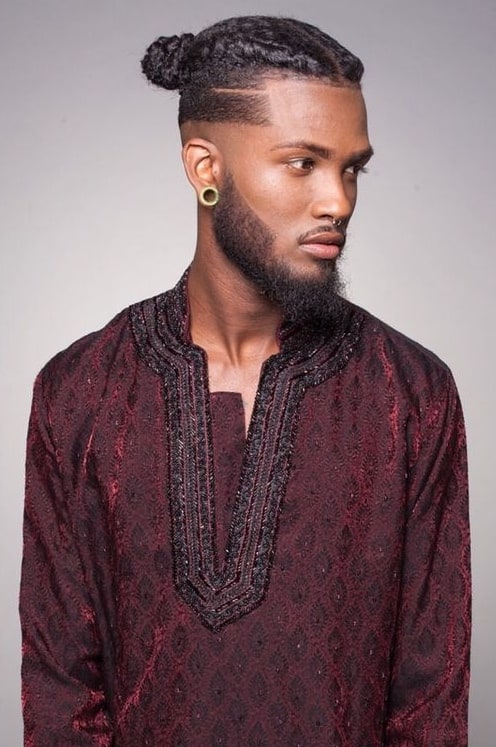 A small man bun with an undercut hairstyle can change your look in many ways. A few lines or stripes can improvise the style to make you look better. 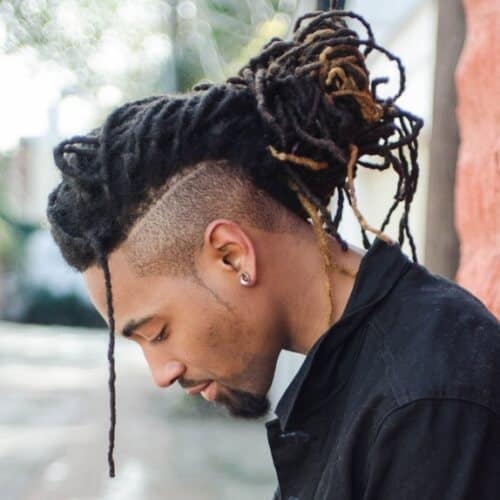 Dreadlocks are something that expresses the identity of black people. They can give it a new meaning transforming it into a man bun. 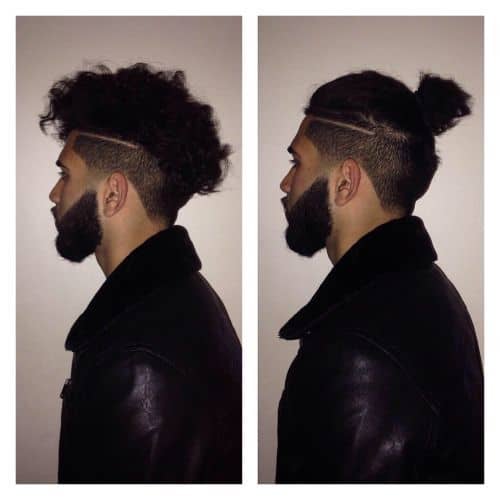 Look how a well-done bun can have a great impact on someones look. You may get the inspirations from this before and after effect of a black man bun. 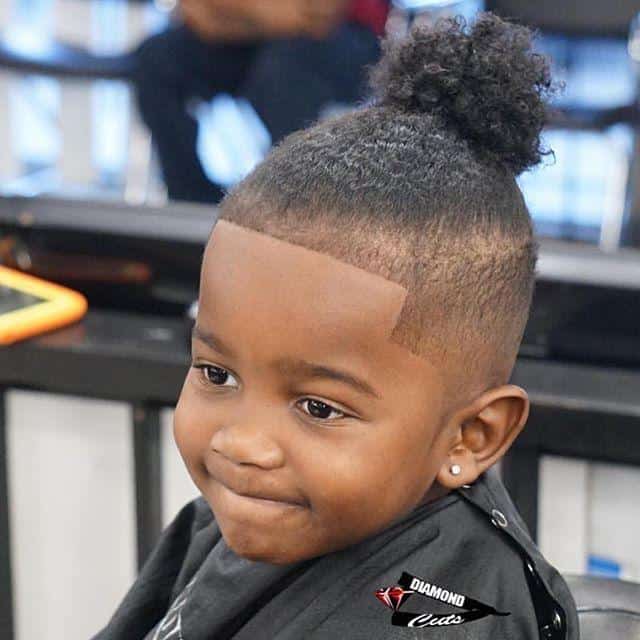 If you are searching for the perfect hairstyle for your baby boy, you’re at the right place. A black boy also can get a man bun, if they have the required length of hair. 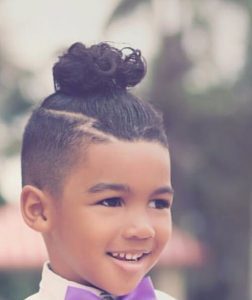 This is another great example of a black boy having a man bun. The top bun looks amazing with the presence of curved lines. 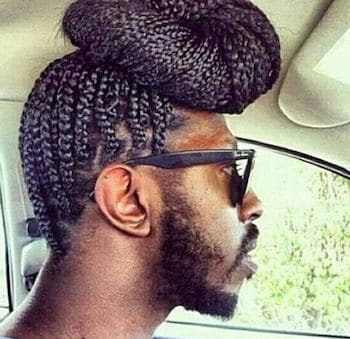 Artificial hair extensions are often used to get a striking hairstyle. This could be a great demonstration of black man bun to the people who love it. 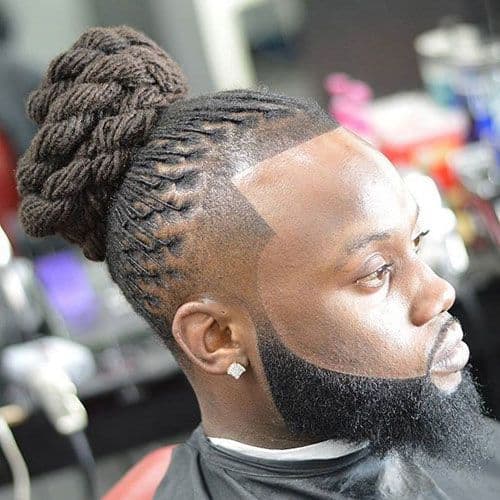 Braids are very common black man hairstyle. It gets a new meaning when associated with a nice looking man bun. 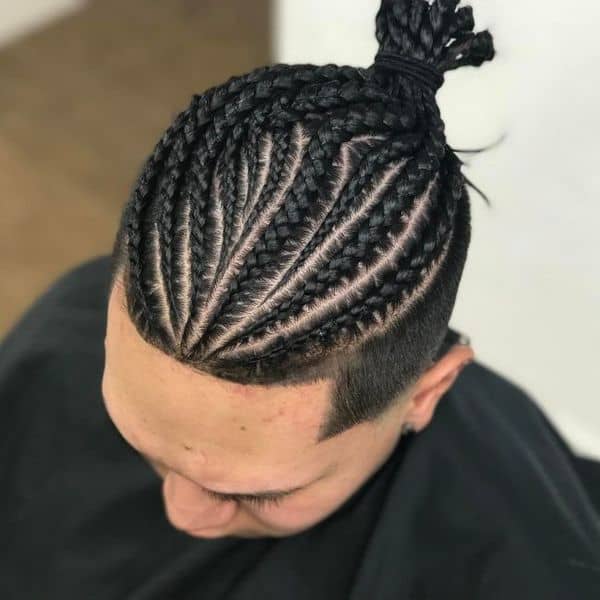 Box braids are a famous form of braids. These braids are often organized in such a way that it looks like cornrows. A bun can enhance the beauty of theses cornrows within a blink of the eye. 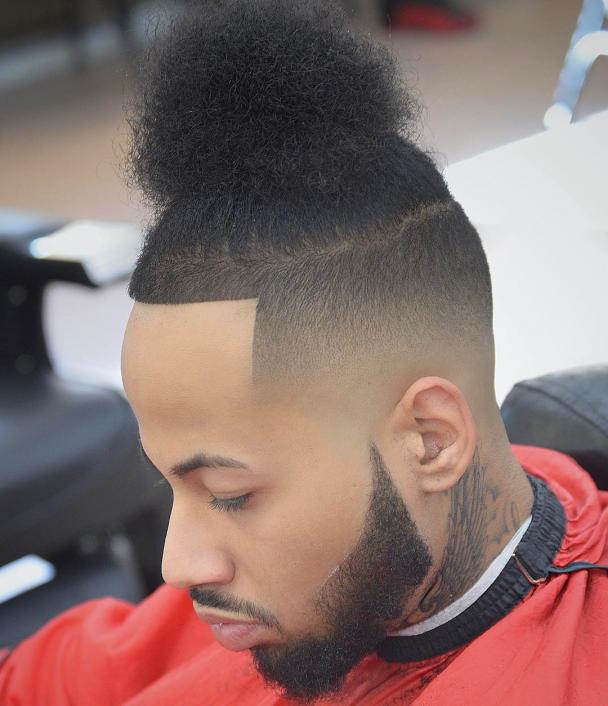 A fade haircut is great if it can produce a smooth transition between the beard and hair. It can’t get any better than that as shown in the picture. The hair is nicely faded with the awesomeness of a black man bun. 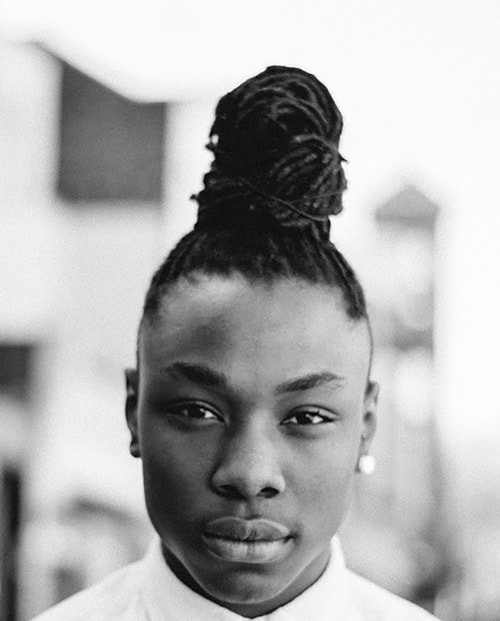 The name says it all. This man bun style looks like a mountain just at the top of the head. If you want to be noticed by all around you, take initiative to get a man bun like this one. 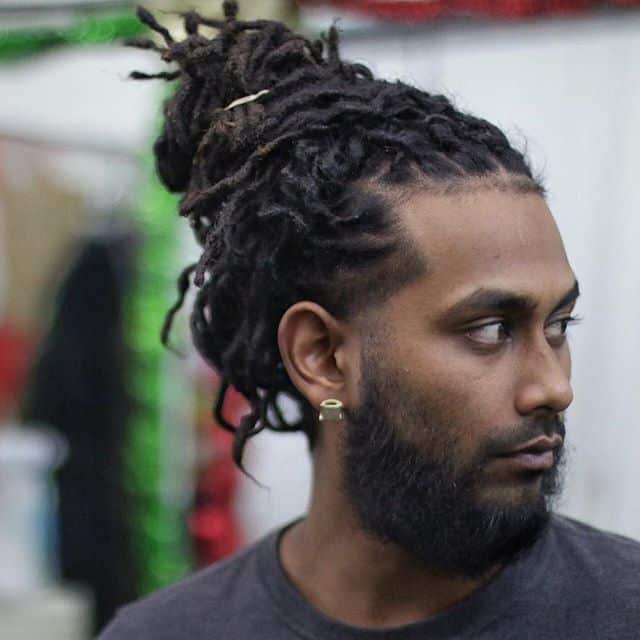 You have to do something big to get the extra attention of the hairstyle lovers. This extra voluminous black man bun can provide you with that sort of long-desired fame. 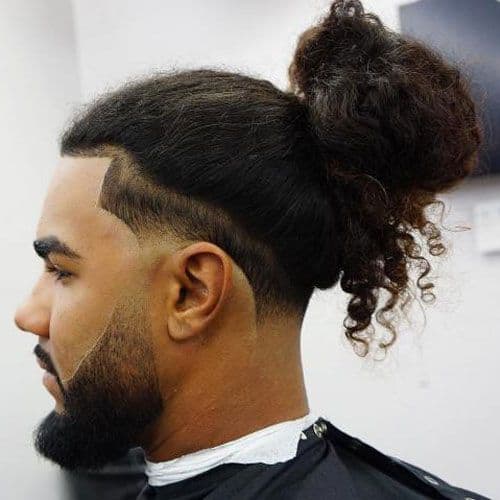 A man without a beard is really not a man. Beard is the manliest thing in terms of facial appearance. So, how can one think of a bun without the presence of a beard? Wear a beard along with the black man bun. 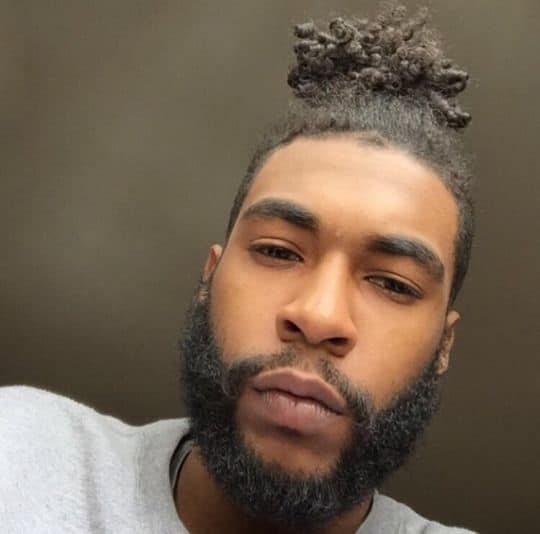 Black people have naturally curly hair. So, almost every black man bun refers to a curly black man bun. Styling curly hair is tough, but it is try-worthy as the look is gorgeous. 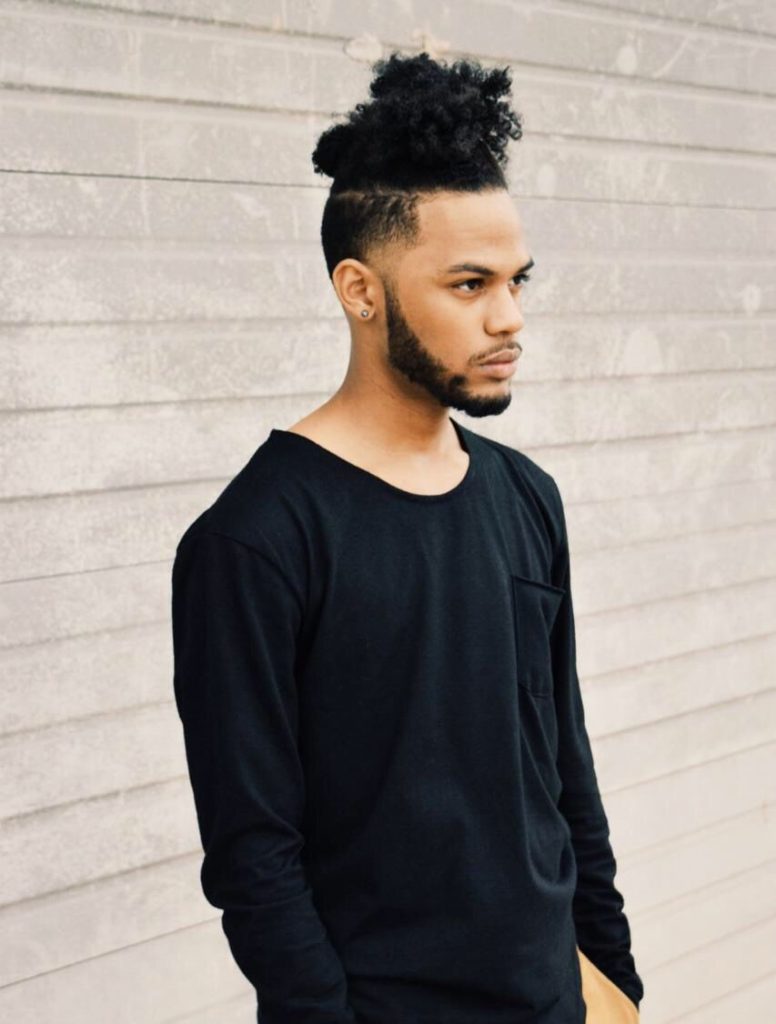 It’s not mandatory that man bun will be pointy and high. Some buns can be flat too. Check the picture to get a precise idea. 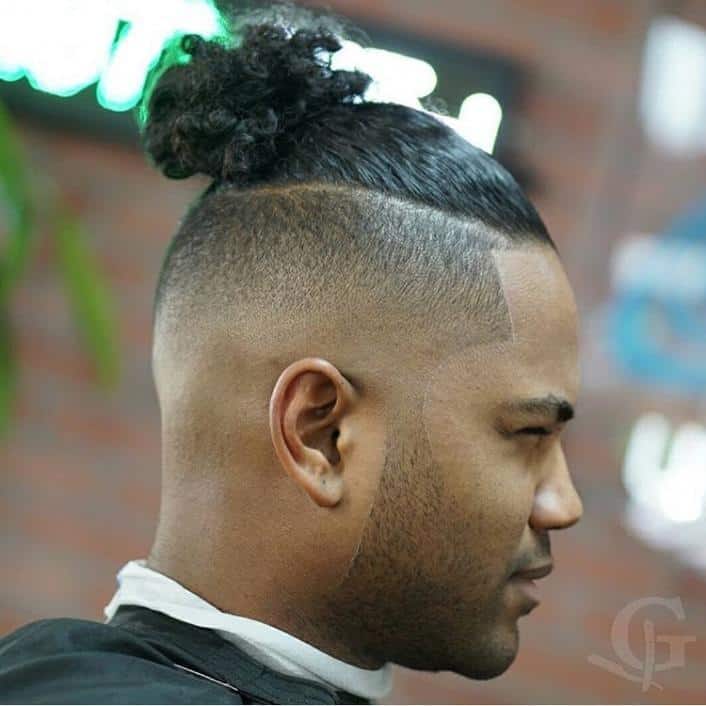 Trim the hair of the head around all sides but keep enough hair on the top to transform that into a bun. This will serve the purpose of getting a distinctive black man bun to show off the style.

How to Do a Black Man Bun

Having a black man bun is not inexpensive as you have to soften the hair to make it flexible. Because the black man has rough hair which can be styled into a bun only if it is prepared well. Use different hairstyling products as depicted in the video to prepare the hair. Then make the buns as per your choices. Different types of black bun have been shown in this video. Follow the steps very carefully. This video tutorial can work as the ultimate man bun hairstyle guide for curly hair.

Some FAQs that Need to Be Answered

Q. When was the man bun trend started?

Ans: Man bun has its origin deep-rooted in the history of  Greek and Buddhist people. At first, it was meant to be a style of the women, then, with the course of time, this started having an impact on men’s look from the 70’s.

Q. Why is the man bun hairstyle so popular?

Ans: Different celebrities, sportsman and TV shows displayed the charm of man buns at different times. And, in the era of social networking, these styles spread at a supersonic speed. That’s how people came to know about man bun hairstyle and made this popular.

Q.What is the minimum hair length for a man bun?

This depends on what type of man bun your getting. If it’s a full bun, the minimum required length is 12 inches. For a half or semi bun, one must have at least 6inces of hair to tie the hair perfectly. So, the minimum length is 6inches.

Q. How long will it take me to get a man bun?

Ans: Let the hair grow long for at least six months. Then you will need one hour at most to get a man bun.

Ans: Of course, they can. Actually, their hair is curly and voluminous, so it’s easy for them to look great in man buns.

Every style needs to be nurtured perfectly to get the best look possible. Black people tend to have comparatively rough and curly hair, so the styling must be done with great care. A well-groomed style will look stunning, on the contrary, a misplanned style may ruin the whole plan. Black man bun can be of great help in this regard. 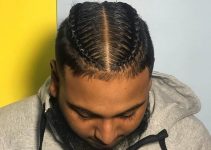 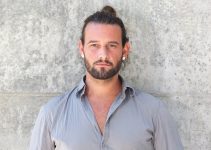 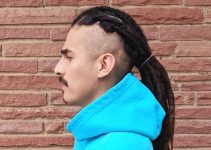 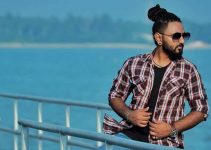 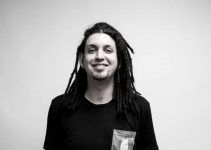