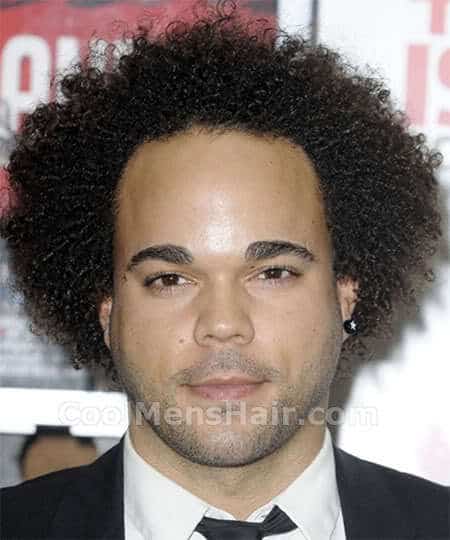 Nate James afro hairstyle.
Nate James is an English singer/songwriter. His preferred genre is soul. James is one of the most successful independent performers in the world, operating his own record label. He is also well known for his afro hair.

The afro is a popular style among black performers. It saw its hay day back in the 1970s, when it was worn by almost all black men. However, many performers still choose to wear this style today. It is easy to maintain and creates an impression.

An afro is easiest to achieve when one has naturally curly hair. However, even men with straight hair can wear one if they have a permanent put into their hair. Nate falls into the category of those with natural curls.

Nate wears his hair relatively long. This gives it more body and makes the style stand out from his head, giving him “big hair“. The curls simply fall all around his head and form a sort of cloud of hair.

No products are needed to maintain this style. It may become necessary to run a pick through the hair occasionally to tease it back into a standing position. This is most likely early in the morning when first arising from bed.

The Nate James afro hairstyle is one that is easily copied. It is easiest for black men whose hair naturally tends to curl tightly. However, white men with curly hair and those who get a tight perm can reproduce this style with ease as well.

It is a very popular style among singers, despite having fallen out of favor in the general population. It is a very low maintenance hairstyle that requires little or no product to maintain and very little use of comb or brush. In fact, a pick is the best implement for refreshing such a style.