Ryan Sheckler has been a professional skateboarder since the age of thirteen. He has taken medals in several Summer X games representing the US. Ryan is also a playable character in several Tony Hawk video games. Here, we are going to be looking at the Ryan Sheckler buzz cut.

Ryan wears his hair very short. This helps ensure that it does not get into his eyes and interfere with his maneuvers. It also serves to help him look a few years older than he actually is. This was a very important fact during his teen years when he wanted people to take him seriously. 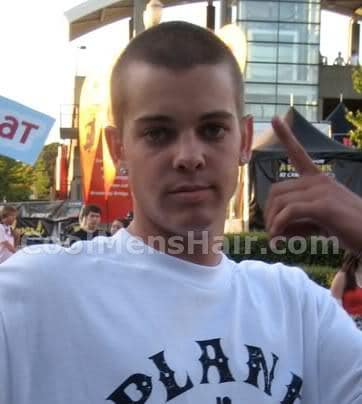 The style he wears is most commonly called a crew cut. Most people mistakenly attribute the origins of this cut to the military. The truth is that this cut was originated by the Yale rowing team. Each member of the crew had his hair cut in this style for competition.

The characteristics of this style are that the sides and back are cut with a short guard on a pair of electric clippers. The top is cut with one size longer guard so that it is just a tiny bit longer. This is an acceptable cut for men in virtually any profession.

Many men choose to wear their hair very short. The Ryan Sheckler buzz cut is a classic example of a short style that has been popular for many years. It has waxed and waned in just how popular it is over time, but it is definitely a style that has stood the test of time.

It serves a couple of useful purposes in that it keeps someone’s hair out of his eyes and eliminates the risk of vermin such as lice. In addition, it is an attractive style on most men, especially young men who want to look a bit older.