For men, the hairline can be a defining part of a haircut. Many men choose their haircut based on what type of hairline they desire or already have. From broad, narrow, or square to M-shaped or uneven hairlines… there are a variety of handsome haircuts to suit them. 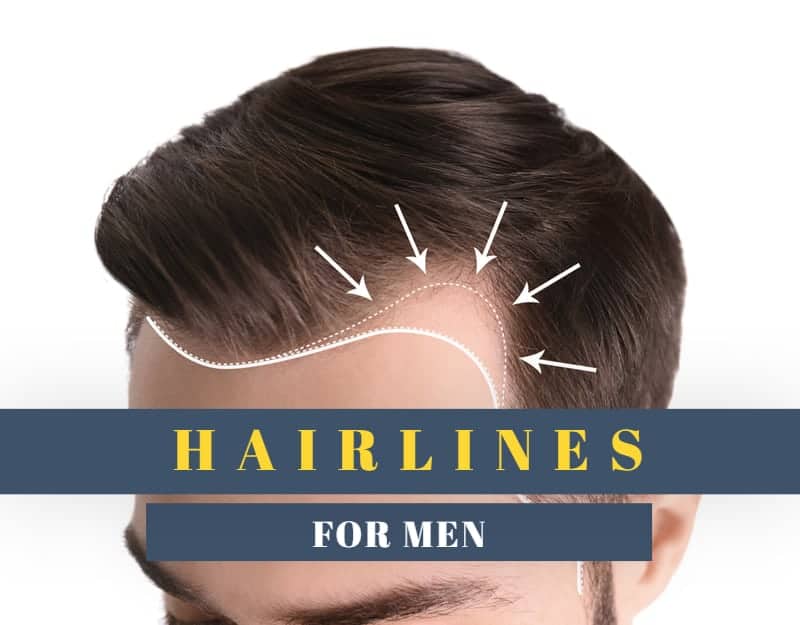 A square-shaped hairline is marked by a straight flat line across the forehead and down the temples; they’re typically seen on men with rectangular face shapes and strong jawlines.

If this is your hairline, opt for a wavy topped fade, comb over, slicked back undercut, or a short and neat haircut. These all make the flat line of the forehead more prominent, perfect for making the face appear thinner and less square.

If you have long hair, encourage whatever natural texture you have by using hair gel to brush strands straight up or to the sides for a small wave.

Pompadours typically feature long hair on top, a great option if you want to keep a bit of length. Looking for a more professional hairstyle? Part hair at the side above one eyebrow, brushing the other half over and smoothing with product.

Men with receding hair and an oval face usually have a narrow-shaped hairline, which makes the forehead small. 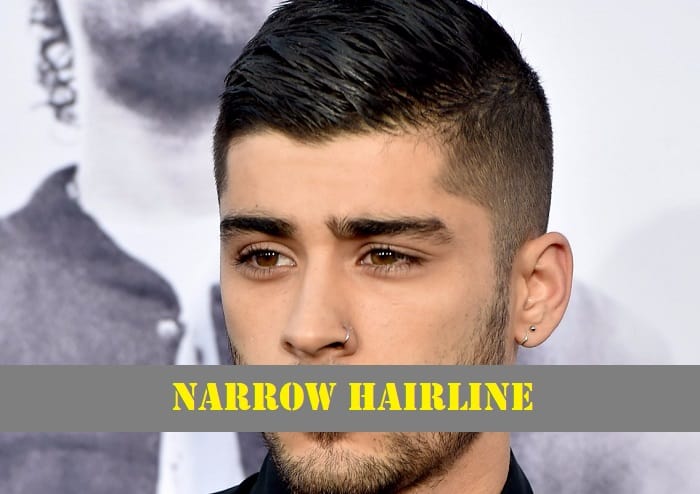 The best styles for men with this type of hairline are a comb over with a fade, side-swept bangs, mohawk or fauxhawk, slicked back styles, or even a completely shaved head. These will all distract from your receding hairline and make it look purposeful. You can even add detail to a fade haircut by shaving in lines to the side.

Fauxhawks can be any length, and slicked back styles always look professional for work or clean cut for date nights. Shaving the head completely will not only give you a low maintenance style but get rid of your hairline altogether which can be helpful if you want a quick problem-solver.

When it comes to a broad hairline, this usually means you have a broad forehead and a round face, which some men are sensitive about. But there are several haircuts that can balance out your dimensions.

The Caesar cut, for example, is short hair with a sexy bang that can be brushed to the side or straight up for spikiness. Brushing bangs across the forehead will minimize the width. 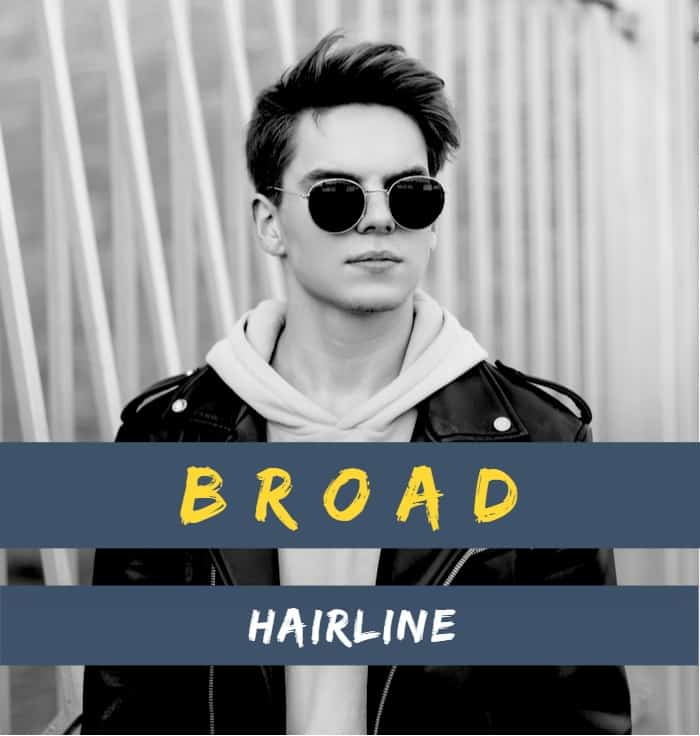 Pair any of these with a fade if you prefer sides shorter than the top. As with the above hairstyles, shaving in detail like lines or zig zags is an easy way to put your own personal touch on the look.

If your hairline forms a downward V-shape in the middle of the forehead, which also looks like an M when viewing the hairline as a whole, then you have a widow’s peak or M-shaped hairline. 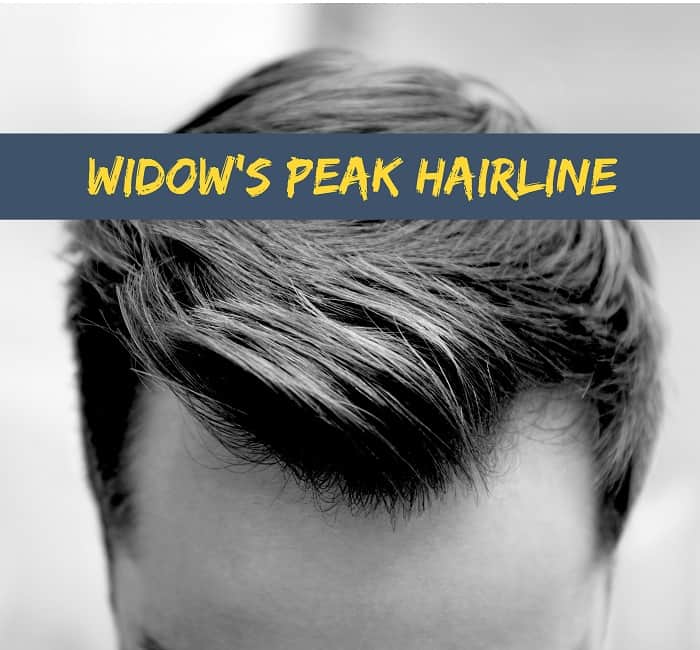 You typically see these on people with a heart-shaped face and it can be pronounced or subtle, with noticeably thin hair at temples. This hairline can be a sign of developing baldness, but it can just be the result of genetics.

To disguise a widow’s peak, avoid hairstyles that emphasize it: any cut where the bangs are brushed straight up. Instead, brush your hair to one side as bangs or straight down with a messy or choppy texture. To show off the widow’s peak, slick hair back or pull it into a man bun or ponytail.

Mature hairlines affect men with a variety of face shapes and don’t result in baldness. Having a mature hairline simply means the forehead is temporarily widening, although hair thins at the temples. 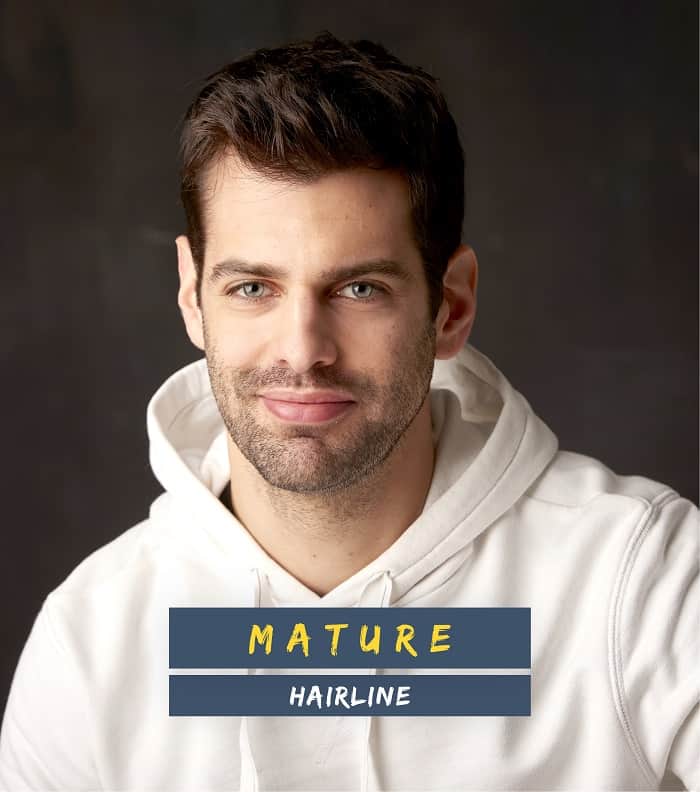 Men with these hairlines can experiment with different hairstyles until the hairline is settled. Try a medium hairstyle parted in the middle and covering the hairline, a short haircut with a hard part, or even a suave coiffed style.

There are some men whose hairline does not look the same on both sides – this is an uneven hairline.

If you look in the mirror and see a “W” shape, a zigzag pattern, or one side seems just a little heavier with hair than the other, then this is most likely your type of hairline. Again, an uneven hairline can be seen on men with any face shape. Luckily, this gives you a bit more freedom when it comes to which haircut you can pull off.

Keep hair long, try a messy bedhead style, a short slicked back style, faux hawks or buzz cuts. While they all come with varying degrees of maintenance, it is reassuring to know they will all look amazing.

In general, longer haircuts should be chosen when you want to minimize the look of an unfavorable receding hairline, while almost any length of haircut can be used for square, broad, and round hairlines.

Pay attention to these guidelines to find the best haircut for your hairline and you can’t go wrong. By staying detailed and maintaining a cut that flatters your angles and face shape, you can feel confident you’ll always look your best!