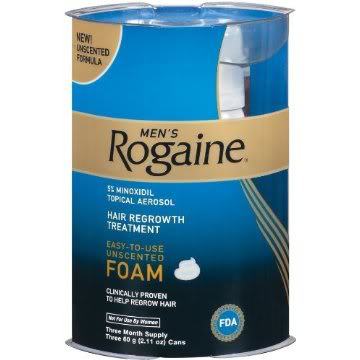 Rogaine is the brand name for the drug, Minoxidil, in the United States. It is sold as a topical solution to stop or reverse hair loss resulting from androgenic alopecia (male pattern baldness). This is a genetic condition that affects many men and a few women.

While this drug has been shown to be effective, it has some potential side effects. It is essential that one have an understanding of Rogaine side effects before beginning a treatment regimen.

There are certain common side effects that are experienced by many people. In most cases, these are minor enough that they do not consider stopping the treatment. These include burning or irritation in the eyes, itching and irritation of the treated area, and unwanted hair growth on other areas of the body.

One ironic side effect noted by many users is increased hair loss during the first two weeks of use. It is believed that this is caused by the body adjusting the growth phases of the hair follicles in response to the treatment. This causes some hairs to fall out sooner than they would have otherwise. However, it also hastens the beginning of the growth phase, leading to positive results in a shorter time.

Dandruff and dermatitis are possible Rogaine side effects as well. The culprit is not believed to be the drug itself here. Alcohol used in the preparation is most likely the cause as it dries the scalp. It is also possible that the minoxidil dries on the scalp and flakes off.

Some effects are more severe, indicating that the treatment should be discontinued. These usually indicate an allergy to the medication and/or components of the solution. These include a rash or hives, difficulty breathing, swelling of the face, mouth, lips, or tongue, dizziness or fainting, rapid heartbeat, chest pain, unexplained sudden weight gain, and/or swelling in the hands or feet.

Minoxidil was originally developed as a blood pressure medication. Hair regrowth was found to be a significant side effect. This led to the development of the topical version used to stop hair loss. It originally required a prescription to obtain, but the FDA determined that it was safe enough to be sold over the counter.

Knowing the potential Rogaine side effects before one begins treatment is essential to making an informed decision about how to address the problem of hair loss from the genetic condition known as androgenic alopecia.

Most of these are minor, allowing the user to continue with the treatment regimen as normal. In some cases, minor changes may be needed, such as using an anti dandruff shampoo.

A few of the Rogaine side effects are severe and should be brought to the attention of one’s physician. These are normally signs that the person is allergic to either the medication itself or one of the inactive components of the solution.

Allergic reactions can vary from mild to life threatening, with no way to know if the next exposure will lead to a mild or severe reaction. Therefore, these indicate one should stop the treatment immediately.

Reestablishing the source of nourishment will promote hair growth. The methods in “Hair Again!” do not only deal with the symptoms but treat the root causes as well! By solving that you can expect your lost hair to come back within 2-5 weeks.  You will actually need to spend up to 5 minutes daily doing the treatment. It’s that SIMPLE! Download Here!