One of the most common problems men encounter as they age is the occurrence of thinning hair or the hair beginning to recede from the forehead. This often begins more toward the sides of the head with the center holding out the longest. Fortunately, men today have the option to use Minoxidil for treating receding hairline.

This drug was initially invented to be an oral medication for hypertension. It was noticed, however, that users in the testing phase began to grow more hair all over their bodies. The strength of this drug was refined and it was put into a form more suitable for topical application in the exact areas where it is needed.

It works by stimulating blood flow to the affected areas, which brings more vital nutrients to the scalp and promotes the healthy growth of hair. It also blocks the formation of the male hormone, DHT, which has been associated with hair loss. DHT chokes off the follicles, allowing the hair to fall out but not be replaced. 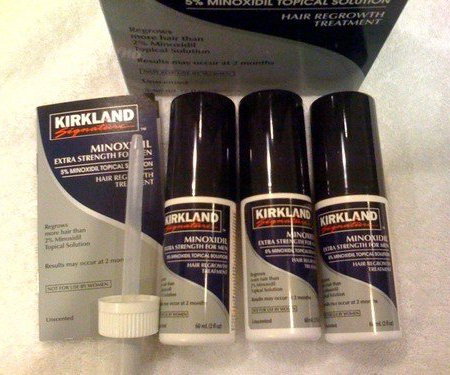 . It has 3 count, 2 ounce bottles. It is enough for 3 months supply. When using it, you should apply it to the affected area twice a day.

It has been shown to be highly effective in most cases, though there is a small percentage of men who do not respond. Most will see a slowing of the hair’s recession in two months. Many will begin to see new growth shortly thereafter. If there is no hair regrowth in 4 months, stop use; it means that it does not work for you. Read all information on package before use.

The one drawback to using Minoxidil is that once treatment has begun, you must continue to use it as a matter of routine for the rest of your life. If the use of this medication is discontinued, the original pattern of receding hairline and hair loss will begin again and may be more difficult to stop again with the same product.

Another lack of this product is you will get your scalp itch slightly, but it is not a big deal as long as it can grow your hair back. 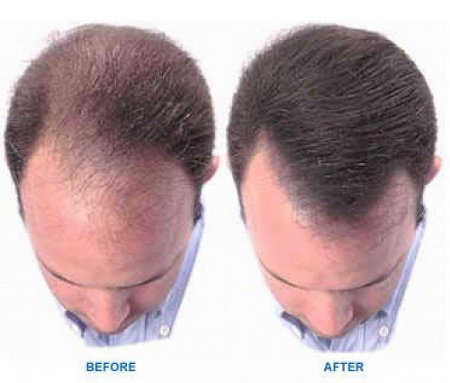 Minoxidil, sold under the trade name Rogaine in the U. S. Is one of the first line treatments for hair loss from male pattern baldness (androgenic alopecia) in both men and women. It is currently sold without a prescription as a topical solution that is applied directly to the scalp in an effort to stop hair loss and promote regrowth of hair. However, this was not always the case.

When minoxidil was first introduced, it was sold in tablet form as a prescription blood pressure medication. It is, in fact, one of the strongest antihypertensives available and only prescribed in cases of extremely malignant high blood pressure that do not respond to other medications. An interesting side effect was noted in patients who took minoxidil tablets. They tended to see an increase in growth of body hair.

Experiments were conducted that showed that a topical application of the drug to the scalp could stop hair loss as a result of male pattern baldness and, in some cases, reverse the process. It was determined that a topical solution of 5 percent was adequate for men experiencing hair loss and a solution containing only 2 percent would suffice for women.

Originally, even the topical form of the drug was sold by prescription only. Following a period of several years and a variety of research studies, it was shown to be safe enough when the directions were followed to make it available over the counter without a prescription.

While the medical community still does not understand the mechanism of function that makes this drug work to stop hair loss, there is sufficient medical evidence showing that it does affect the hair follicles in some way.

Oddly, one possible side effect of the use of minoxidil is hair loss. This only occurs in rare instances, however, and is almost always followed by a period of regrowth. The drug generally continues to be effective as long as it is used regularly, but stops working and hair loss resumes if treatments are ceased.

Reestablishing the source of nourishment will promote hair growth. The methods in “Hair Again!” do not only deal with the symptoms but treat the root causes as well! By solving that you can expect your lost hair to come back within 2-5 weeks. You will actually need to spend up to 5 minutes daily doing the treatment. It’s that SIMPLE! Without chemicals, pills, supplements or hair transplants. Download The Methods Here!