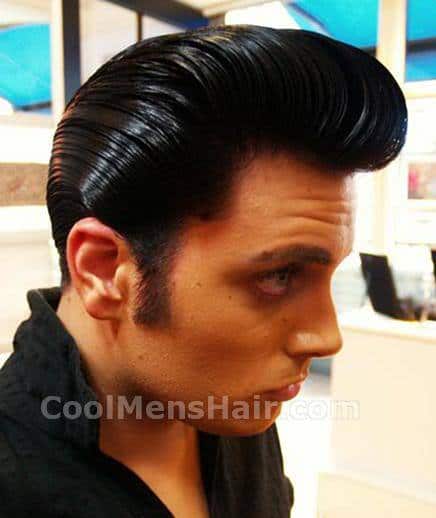 Greaser refers to a subculture of young men in the 1950s that was into fast cars, fast girls, rebelling against authority. One trait they had in common was their hairstyle. Hair cream or pomade was thickly applied to grease their hair back and hold it in place.

There are many different formulations of pomade. All contain an oil and a percentage of wax. The differences lie in the balance between the two. The first step to achieving the greaser look is choosing a pomade with a higher oil content.

With the hair still slightly damp, take a good-sized dollop of pomade and rub it between the hands to distribute it evenly. Next, run the hands through the hair to coat it thoroughly. This will impart a wet look that stays with you even after the hair has dried.

Using a comb, sweep the hair straight back or comb it into one of the other popular greaser styles of the era. This could include a pompadour, a duck’s ass, or another style. Make sure the hair sets in the chosen style before going out.

Carry a supply of additional pomade along for touch-ups throughout the day. This will ensure that the hair stays in the proper style and help to maintain the greasy appearance for which greaser hair was named.

Knowing how to grease the hair with the pomade like a 50’s greaser can come in handy for attending themed parties, or simply for expressing one’s own rebellion against his parents or other authority figures. One may also choose to adopt some of the clothing styles that were popular during that era to achieve a more genuine look to match the adopted 50’s greaser hairstyle.