Georgios Samaras is a 35 years old Greek footballer, currently playing for the Celtic Club of the Scottish Premier League. His position is usually a striker, but he can also play as a left winger. The Georgios Samaras hairstyle is dark and unevenly trimmed, but combed straight back from his high forehead. His sideburns are short and trimmed straight across at the mid point of his outer ear. 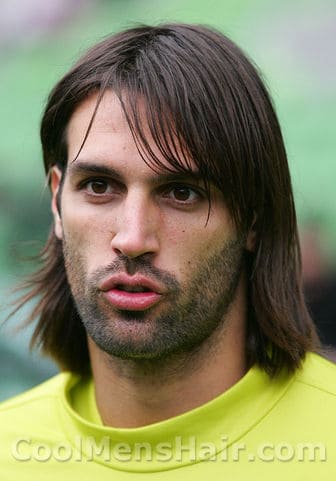 Although the back length reaches to his shoulders and below, the length from the top of his head reaches only to earlobe level. When the locks are under control, they are brushed straight back. During more active moments, the strands fall loosely across his face.

Of course, there is no amount of control substance that will keep long strands from moving around during sports activities, such as that played by the man and his team mates. The length of the strands is another hindrance to control while involved in the game. A head band does provide some visual freedom. At other times, a loose club offers some control of the strands.

Although at the end of his 3rd decade, the typical male pattern baldness issues have not yet become very noticeable. It will be interesting to see whether the straight back style will continue as the player grows older. Obviously, some control is required when the occasion is more formal, his hair does not appear to have a very formal style. 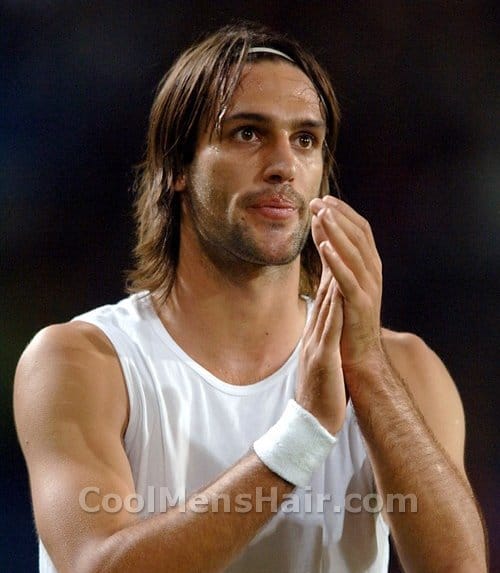 The Georgios Samaras long hairstyle is one that would probably not be appropriate in a professional or office type position. For a more casual lifestyle, or one in which the man is in active sports, entertainment or outdoor activities, the style makes sense. Because it doesn’t require a lot of time to keep it trimmed or styled, it is a very young look.