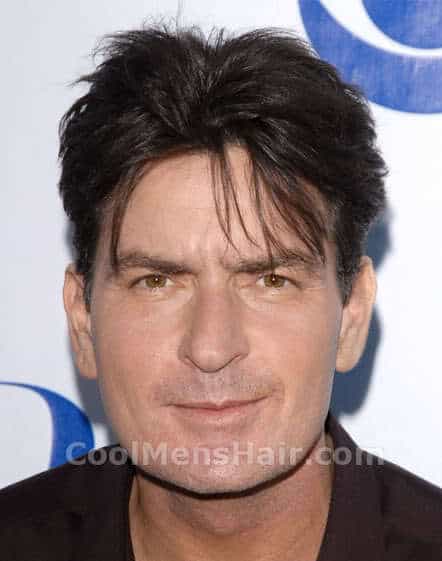 Charlie Sheen is an American television and film actor. The youngest son born to Martin Sheen, his real name is Carlos Irwin Estevez. He is a brother to actor Emilio Estevez. The bulk of Charlie’s acting experience is in comedies, including “Two and a HalfMen” from which he was recently fired. One thing that is unique about him is the Charlie Sheen hairstyle.

There have been a few variances called for by particular roles through the years, but he generally wears his hair in the same style. The hair is cut to a medium length all over. The sides are swept back from the front of the head and the top is swept back and to either side, leaving a small part in the middle.

Maintaining this style is not overly complicated. He simply applies a generous amount of pomade to his fingers and runs them through his hair from front to back. As the style needs refreshing throughout the day, all he has to do is run his fingers through the hair again.

A few spikes from the very front are allowed to stand up from the rest of the hair to give him a bit of a wild look. In many ways, this style looks as if he has done nothing with his hair. The truth is that it does take a bit more work than appearances reveal.

With only a few exceptions, this is the one trademark Charlie Sheen hairstyle that he has worn most of his adult life. It is a relatively high maintenance style. That being said, this is one of the easiest medium length styles to achieve and maintain. It does not take any special tools to get it into the desired shape. It does not require a lot of product to provide the proper hold.