Miguel Jontel Pimentel, popularly known as Miguel, is an American recording artist who loves to get various hairstyles known for his hip hop, funk, edgy and electronic music. He is also a songwriter and producer and identifies himself with R&B artists like Elle Varner and Frank Ocean. 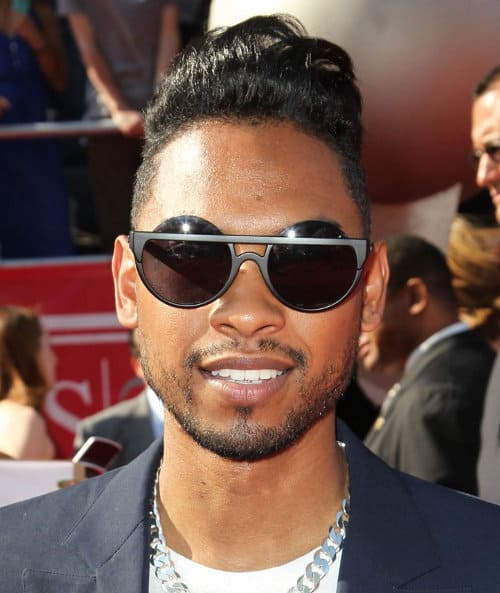 The Miguel hairstyle has been in a lot of news lately and this fashion statement will surely make you stand out of the crowd. Here the hair has a traditional curly pompadour style but modified by including buzzed sides, which makes the hair above the ears and back very short.

Through the years pompadour style has seen many changes and variations but there are a few things common in this particular style which gives it its distinctive look. The hair is swept up away from the face and even from the side and back at times, and then it is worn high over the forehead.

Although this initially started as a women’s hairstyle, the pompadour became an extremely popular and a classic hairstyle among men during the rock and roll era.

The Miguel hairstyle is different in the sense that the hair at the sides and back are closely cropped. It is sort of disconnected with the crown of the head, where the hair is swept up & back and is given a height of four inches or longer according to one’s preferences.

You will need to use some styling paste or pomade to easily separate the hair and a blow dryer to give the hair on the top volume and height. This way it will not fall over the sides and maintain its height.

Miguel hairstyle looks great on straight hair too, although the Miguel hairstyle with buzzed cuts specifically refers to a more aggressive version of the curly pompadour. It is a casual hairstyle, but it can also be neatly slicked back for formal occasions.