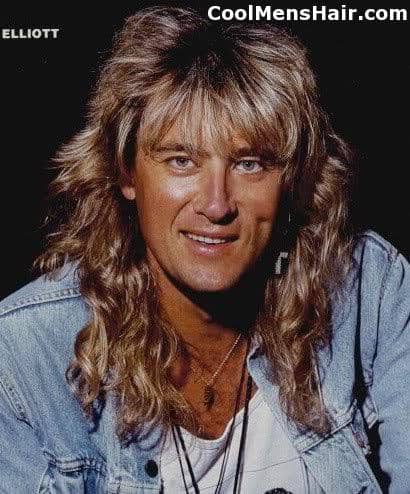 Joe Elliott hairstyle.
Joe Elliott, best known as the lead singer of Def Leppard is an English singer/songwriter. In addition to doing vocals, Elliott is skilled at playing guitar, drums, piano, and electric keyboard. He was born August 1, 1959 in Sheffield, South Yorkshire. His current residence is in Dublin, Ireland, where he has a recording studio and has recorded and produced many artists.

The mullet is a haircut that was probably at its most popular during the 1980s, the decade when Def Leppard first rose to fame. The style consists of having the hair cut short on top and sides while leaving the back long. Joe Eliott’s mullet was no exception. 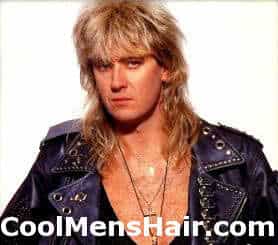 Joe Elliott rocker mullet haircut
However, there was disagreement over what constituted short hair on top and sides. Therefore, there were a lot of stars, Elliott included, that let the top and sides go to near medium length. This made it possible to style the front of the hair in any style one desired.

Elliott chose most often to spike up the hair in small sections so that it stood out in all directions. He could also simply run his fingers through the hair with a bit of gel on them and create a simple messy style that went with his bad boy attitude.

Joe Elliott rockstar mullet hairstyle
Another method used to change up the hairstyle was color. Joe’s hair has been all brown, all blonde, blonde short hair over brown long, and brown short over blonde long. Considering the two different styles with the different hair color combinations, their were no less than 8 different Joe Elliott mullet haircuts. 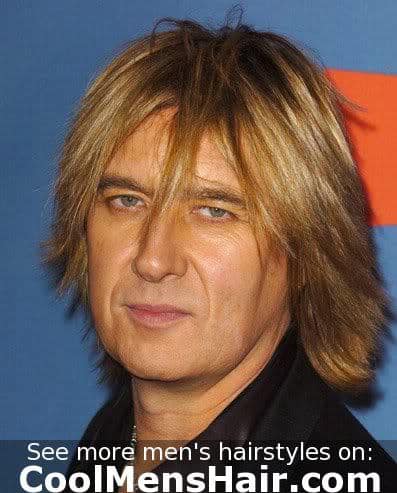 Joe Elliott shag haircut
Today, he wears his hair in more of a shag than a mullet. However, the mullet may have fallen out of favor in the 90s, but it is seeing a return to favor this century. We may see Joe in a mullet again, maybe different from any seen before.