David Guetta is a French house music producer, previously a disc jockey in nightclubs beginning in the 1980s. He has produced several albums in the genre of music and has achieved recognition as the first place DJ of 2023 as voted by fans and announced in “DJ Mag Top 100 DJs” poll. 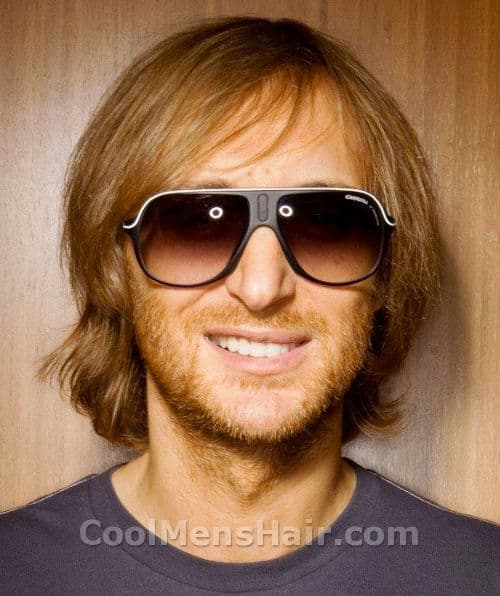 Currently in his mid 40s, the musician and producer has a very plain style which manifests little control. His locks appear to be thick enough in front, but a receding hairline might be camouflaged by a bangs across the forehead. There is a soft part above the left eye and the bangs are side swept slightly on both sides of the part.

If the bangs were combed straight down from the hairline, they would cover his eyes and blend in with the hair at the temples. This part of his hair extends to earlobe length. Further back on his head, his locks reach the shoulders.

From the front, the shoulder length locks do not hang straight, but have a twist out from his head. This texture of hair would require frequent trims to avoid being pulled down by the weight of the strands. The artist’s hair is reddish brown and is match by a short-trimmed beard and mustache.

His facial hair extends from about an inch above the jawline and moves up to the upper lip where it is also short trimmed. The facial coverage is not thick, but is heavier than just a shadow. The beard would require frequent trims to manage the length comfortably. 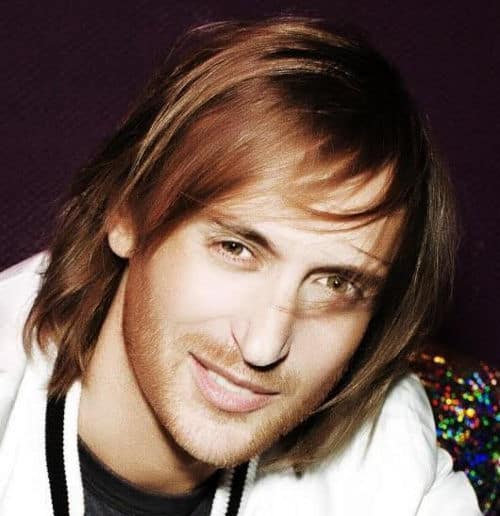 A David Guetta hairstyle is appropriate for a younger man with locks heavy enough to hold the shape. It would be less attractive on greying hair than on darker or even blond hair. The style is less formal than would be appropriate in most business environments, but works well as a signature look for the artist/musician/music producer.