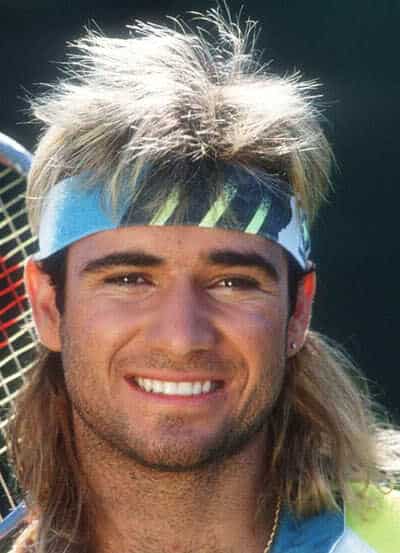 Andre Agassi mullet hair became both a trademark look and a security blanket according to information presented in his recent autobiography. It seems that the long spiked hair worn during the late 80s was a wig or a weave. He began losing his home-grown strands early, before the beginning of his third decade, and replaced his natural locks with the styled hairpieces.

He blames concern over a deteriorating wig with his loss of the 1990 French Open. Fear that the hairpiece would fall off in front of judges, viewers, and fans affected his concentration. He did not have another successful run until 1994. In 1995, he reached the number 1 position in the tennis world. 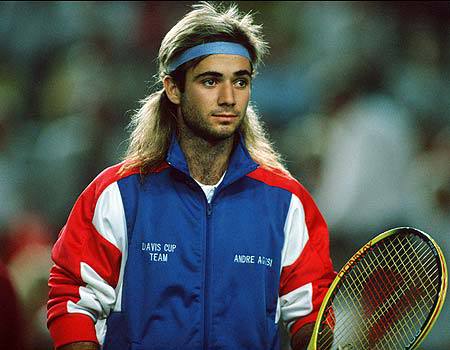 This style by definition is short on top and long in back. However, the interpretation by Agassi featured spikes of lightened strands of mid-length. The back was the normal sandy brown locks of shoulder length. His playing attire often included a headband which called attention to the style. The style was popular with a number of stars and high-profile figures during this decade.

Agassi’s do is much longer on top than the standard mullet. It has been called a mohawk mullet by some. It’s important to note that is not a style that is popular today, perhaps due to the level of maintenance required to keep it looking awesome.

In fact, the look belongs more to the 80s and early 90s than to today’s stars. At the time when the tennis star was sporting the style, it was also being sported by other top-name men. Choosing Andre Agassi mullet hair is still possible today, but the wearer needs to be aware of the extra care required to establish and maintain the style.

A good cut with regular trims is a key feature of the style. If the longer mohawk style is desired, mousse and conditioner are a part of life. Even the more close-cropped version requires attention to length and the use of gel or styling mousse to make the hair on the top of the head stand up or spike.