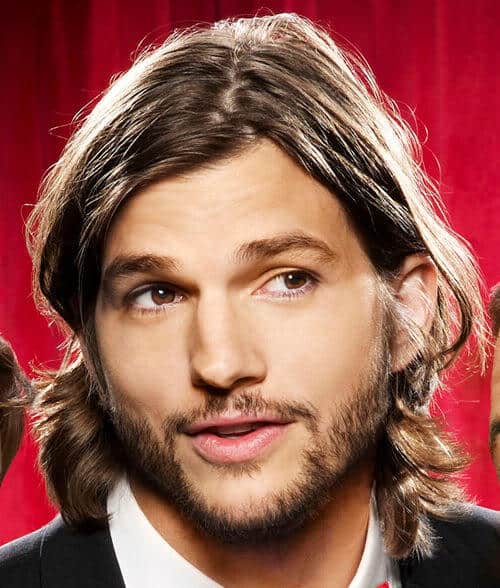 Walden Schmidt is the fictional character played by Ashton Kutcher on CBS television’s “Two and a Half Men“. This character came on the program in its ninth season to replace Charlie Harper, played by Charlie Sheen. Schmidt is a billionaire who dropped out of high school because he was bored and quit MIT, presumably for the same reason. The Walden Schmidt hairstyle is in keeping with the character’s personality.

The hair is worn at about shoulder length with a crooked part on one side. It appears to be unwashed for an extended time. The top is combed over to the opposite side, but done in such a manner that it looks unkempt, as if the character does not care about his appearance.

In addition, he has a thin mustache and a beard that appears to be ungroomed. The overall appearance of this character is that of an individual who is incredibly lazy. This would be in keeping with the personal history that is attached to this character. He was a classic underachiever.

No grooming products are needed to produce this look. One can simply avoid shampooing and allow some buildup of the hair’s natural oil so that it looks ungroomed. Brush hair to one side without taking any effort to create a straight part. Let the strands fall where they will, then flip them back behind the ears.

This was the Walden Schmidt hairstyle for the first half of the ninth season of the show. However, about halfway through the season, he removes his facial hair by shaving and gets his hair cut. His new look is much neater, though the hair is still styled somewhat carelessly. His part is closer to the center and straighter. The bangs are sort of feathered back into the rest of the hair, which just touches the ears and is off the collar.