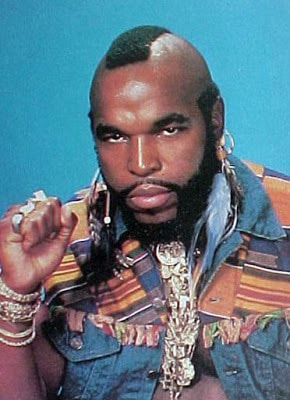 Mr. T with his distinctive frohawk hair.
Mr. T was born Laurence Tureaud, May 21, 1952 in Chicago. He is a wrestling champion, a bodyguard for stars such as Michael Jackson and Diana Ross, and an American actor known for his roles as Sgt. “B. A.” (Bad Attitude) Baracus in the 1980s television series The A-Team, as boxer James “Clubber” Lang in the 1982 film Rocky III, and in I Pity the Fool reality show.

Mr. T is an icon for his distinctive mandinka hairstyle. He said that his unique hairstyle was influenced by the Mandinka Warriors of West Africa. He shaved his head cleanly (along each side), leaving a strip down the center of the head from the top, directly behind the forehead to the back, and added a full beard.