The iconic barber pole has left an indelible mark on America and the world. Barbershops, ever since their inception, have been the local gathering place of almost every community they have occupied since the early Roman empire. But, few of us know their real history, and even fewer know how they are actually made.

Only one man, William Marvy, is left in the United States that still carries on the tradition of manufacturing these slowly disappearing symbols that are etched in the memories of all those who grew up with them.

A Brief History of the Barber Pole 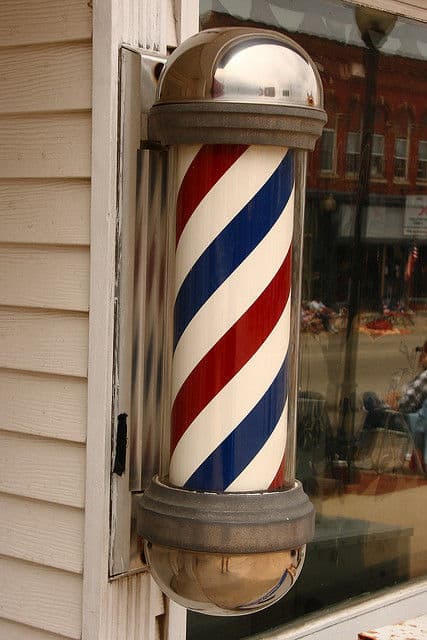 The barber pole originated in the middle ages. At the time, barber-surgeons provided a wide variety of services for their community such as tooth extractions, bloodletting, and even surgery. In their work area would be a wooden pole with a basin at the top and bottom.

The pole was gripped by the patient to pump up their veins and promote blood flow. In the top basin would be kept the leeches for the bloodletting, and the blood would flow down the pole into the basin at the bottom of the pole.

Later, the bandages used during the bloodletting would be washed and hung from the top of the pole to dry. As the wind would blow, the bandages would end up wrapping and twisting around the pole. Soon, the red and white bandages wrapped around a pole would become the signpost for the barber-surgeons place of work.

In 1094, the barber-surgeons began their first organization in France. As Europe came out of the middle ages, another group began to form called the academic surgeons. The College de Saint-Come was founded in Paris around the year 1210 for both groups to study.

This statute made it illegal for the barbers to perform any type of surgery (except bloodletting and tooth extractions), and the surgeons were not permitted to perform the barbaric act of shaving or haircutting.

Another interpretation is that the red represents arterial blood, the blue stripe venous blood, and the white stripe signifies the bandages that once hung from the first wooden poles. Some even go so far as to say that the rotating stripes actually represent the red iron-rich blood flowing downward as it naturally occurs in our body.

William Marvy, the Only Barber Pole Manufacturer In the USA

The modern spinning barber pole, as we know it, was invented by a young man named William “Bill” Marvy. Bill Marvy began working for a barber supply company in 1922. He was only 13 years old. He founded his own barber company while in his early twenties, but was unsatisfied with the barber pole that he was selling.

He soon began working on a new barber pole that would ultimately become the symbol of barbershops across America. On January 1, 1950, Bill Marvy and his two sons, Jim and Robert, powered up what would be known as the “Six Ways Better” rotating barber pole.

The William Marvy Company, in St. Paul, Minnesota, is the last remaining manufacturer of barber poles in North America. 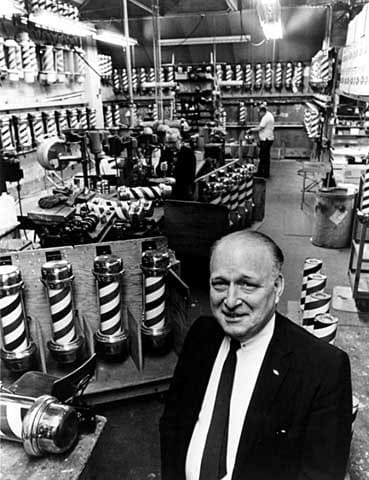 William Marvy. Image via The Tonsorialist.

The company is now led by Robert Marvy along with his sons Scott, Dan, and Brad. This proud company has manufactured over 82,000 barber poles, since 1950. They keep a large parts inventory which gives them the capability to restore just about any barber pole that was ever made by a U.S. Manufacturer. The two original Marvy barber poles are now part of a permanent collection at the Smithsonian Institution.

How Are the Barber’s Poles Made

The assembly process begins by wrapping a red, white, and blue ribbon around a turning wooden mandrel, and then scoring each end of the liner with a knife. Scoring the liner allows the craftsman to easily cut the ribbon to the required length.

Next, the aluminum frame is fitted with a round aluminum casting at the top and bottom. A hand-blown glass tube is inserted into the aluminum castings. The craftsman then mixes a special caulking powder with water to a perfect consistency which he uses to seal the glass cylinder at both ends.

Once the caulking dries, the excess is removed followed by a hand polishing of the glass and aluminum.

The pole is then hung on the wall, and silver paint is applied to the caulking. The silver paint matches the aluminum castings and makes the caulking waterproof. The motor is then installed and fitted with the striped cylinder made earlier.

A two-socket light fixture is put in place on the top of the pole. The light bulb pointing down will illuminate the rotating cylinder, and the bulb pointing upwards illuminates the white globe that is finally fitted atop the finished barber pole.

After final testing, the barber pole becomes one of only 500 that the company will manufacture this year.