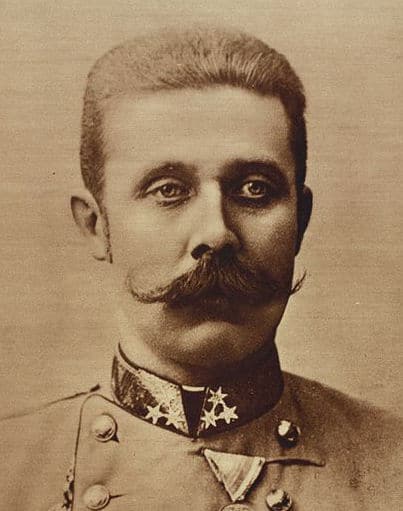 The Archduke Franz Ferdinand handlebar mustache is notable, even in a time when the style was not unusual among men of all ages. It takes its name from the similarity in appearance of handlebars, which were growing in popularity at the time. However, the style of facial hair is purely decorative.

The hair on his upper lip is thick and entirely covers the space between nostrils and his lip line. This portion of lip decoration is combed straight down. It doesn’t extend beyond the upper lip. At the upper perimeter of the mustache, its width is about the same as the width of his nostrils.

Moving out from the center line of his lip, the hairs become longer so that there is adequate length to form the outer portion of the “bars”. The length of these stiffened hairs varies only slightly in the remaining images. At times, they appear to be reaching to the width of his head on each side. At other times, they were slightly shorter in length.

This style of facial hair would naturally require constant attention to its length. Only the tips appeared to be stiffened or waxed. The growth on the upper lip, while thick and full, does not seem to have been waxed.